After graduating with honors from the University of Colorado, Boulder, Dr. Huffer spent his first two years of medical school at the Faculté libre de médecine de Lille in France. He was the highest-ranking student there before he returned to the United States to attend the University of Connecticut School of Medicine, graduating and receiving his medical degree two years later in 1978. Afterwards, Dr. Huffer was selected for the five-year orthopedic surgical residency program at St. Luke's Hospital Center in New York from 1979-1983. He was subsequently selected for the Sports Medicine and Total Joint Reconstruction fellowship at the Orthopaedic & Arthritic Hospital in Toronto, Ontario.

In 1984, after his fellowship in Toronto, Dr. Huffer moved to San Jose where he joined the Orthopaedic & Fracture Clinic, a group practice of orthopedic surgeons operating adjacent to O'Connor Hospital. He remained in group practice for 17 years until the senior partners retired in 2002, and Bruce elected to go into solo practice.

Bruce is a dedicated family man; he met his wife shortly after moving to San Jose and they've been married for 22 years with 3 children. He's been physically active his entire life, with a passion for skiing and tennis that led to his interest in musculoskeletal problems and orthopedics. 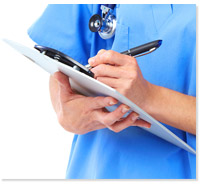